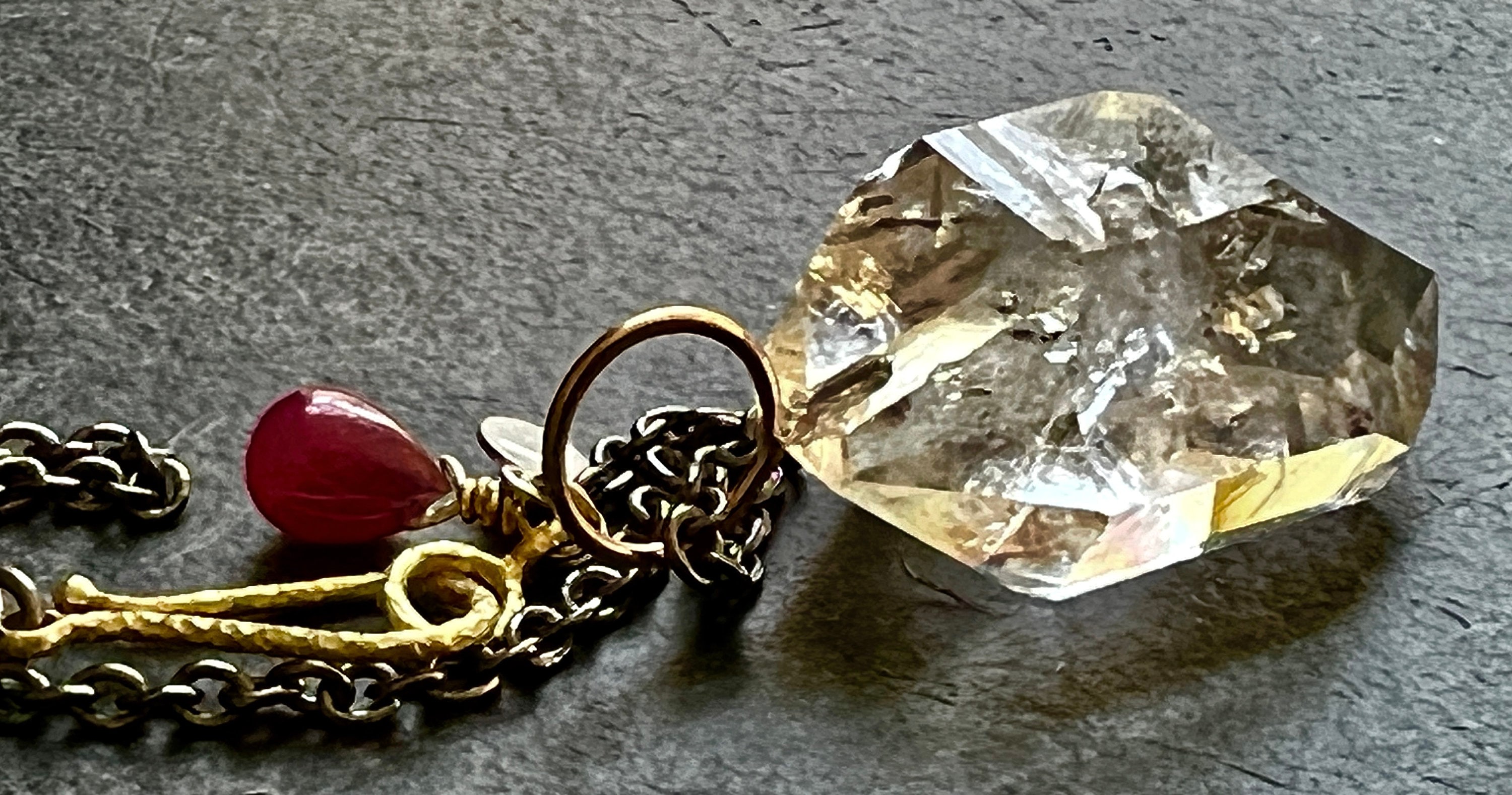 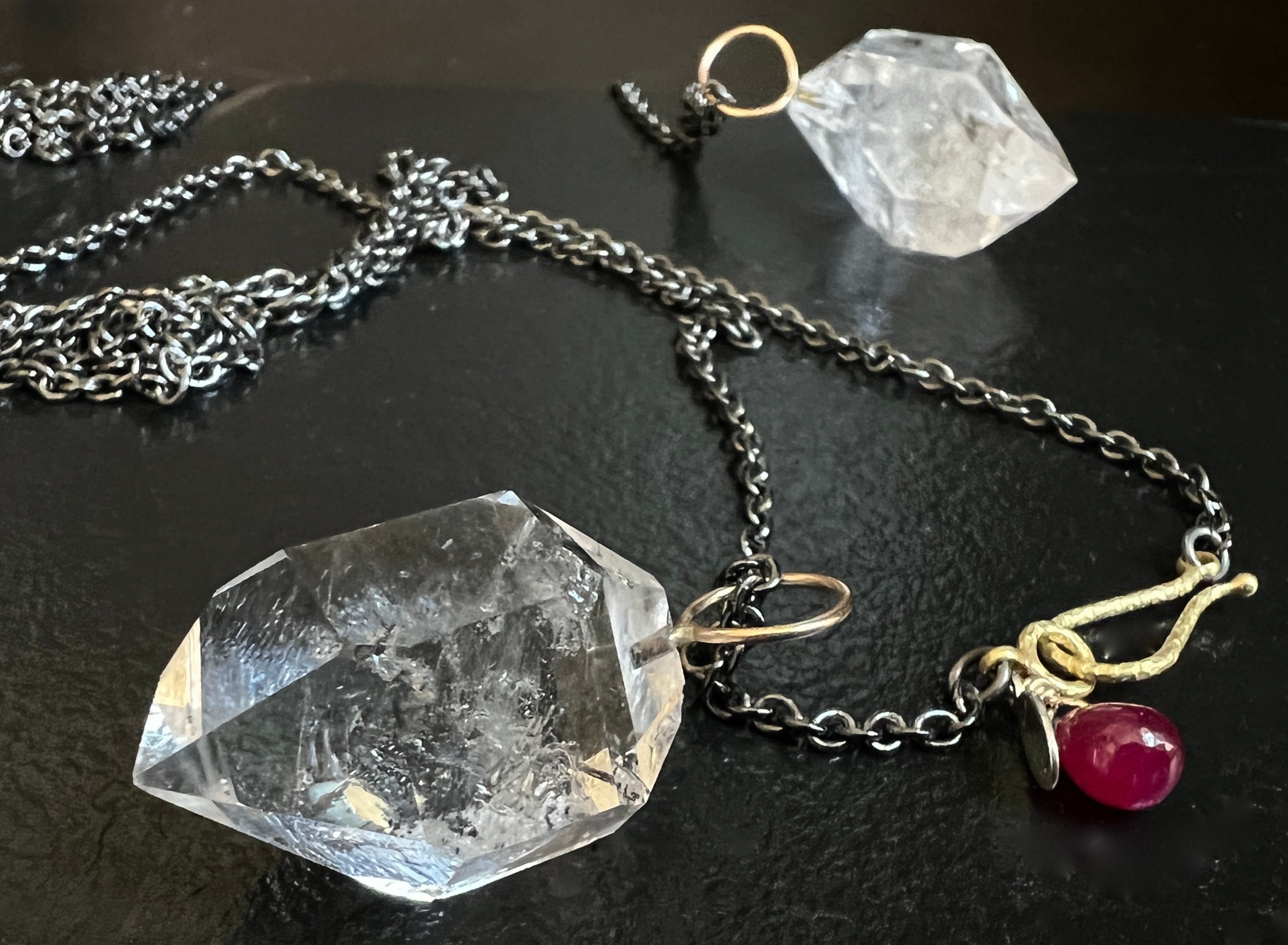 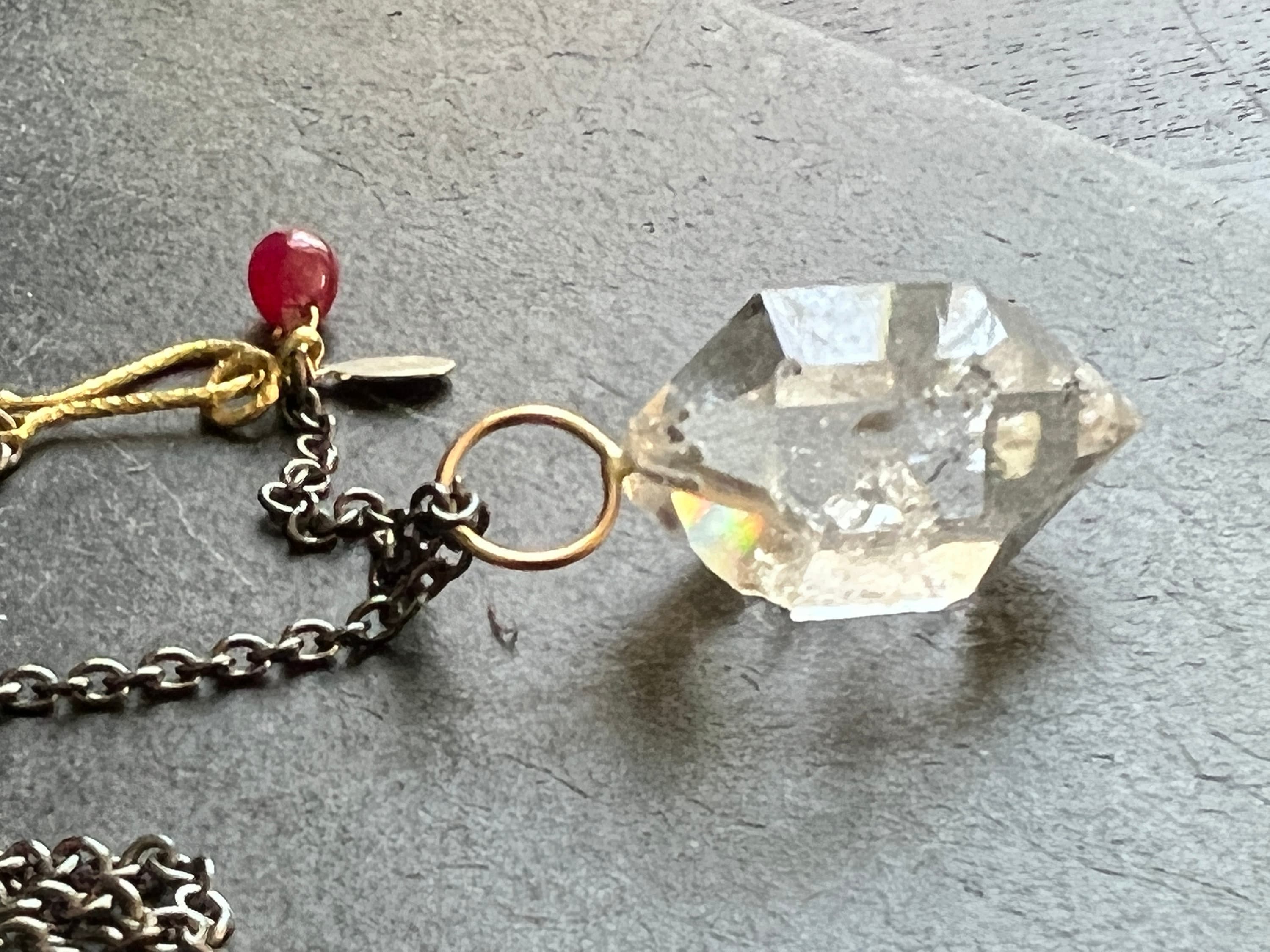 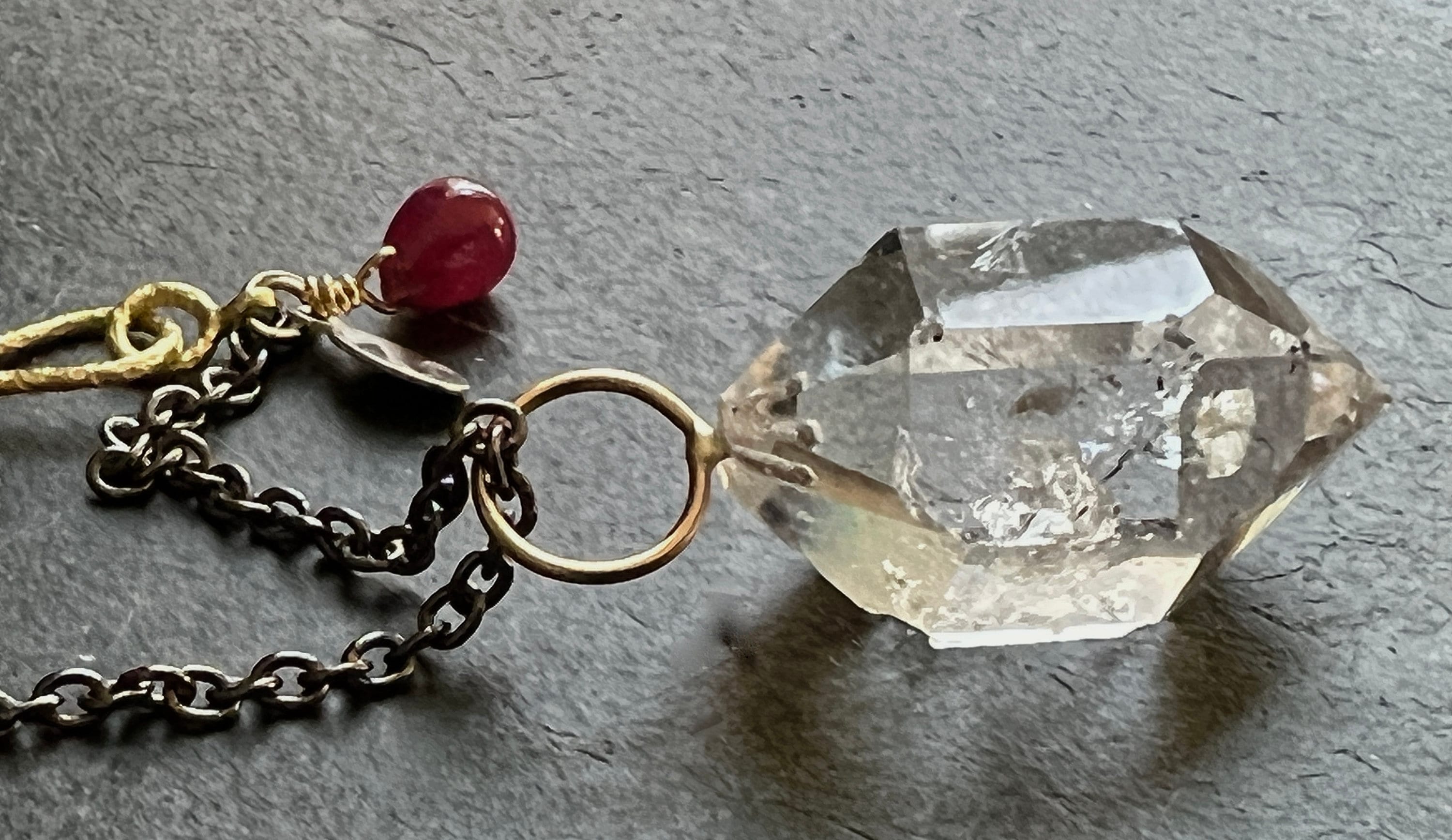 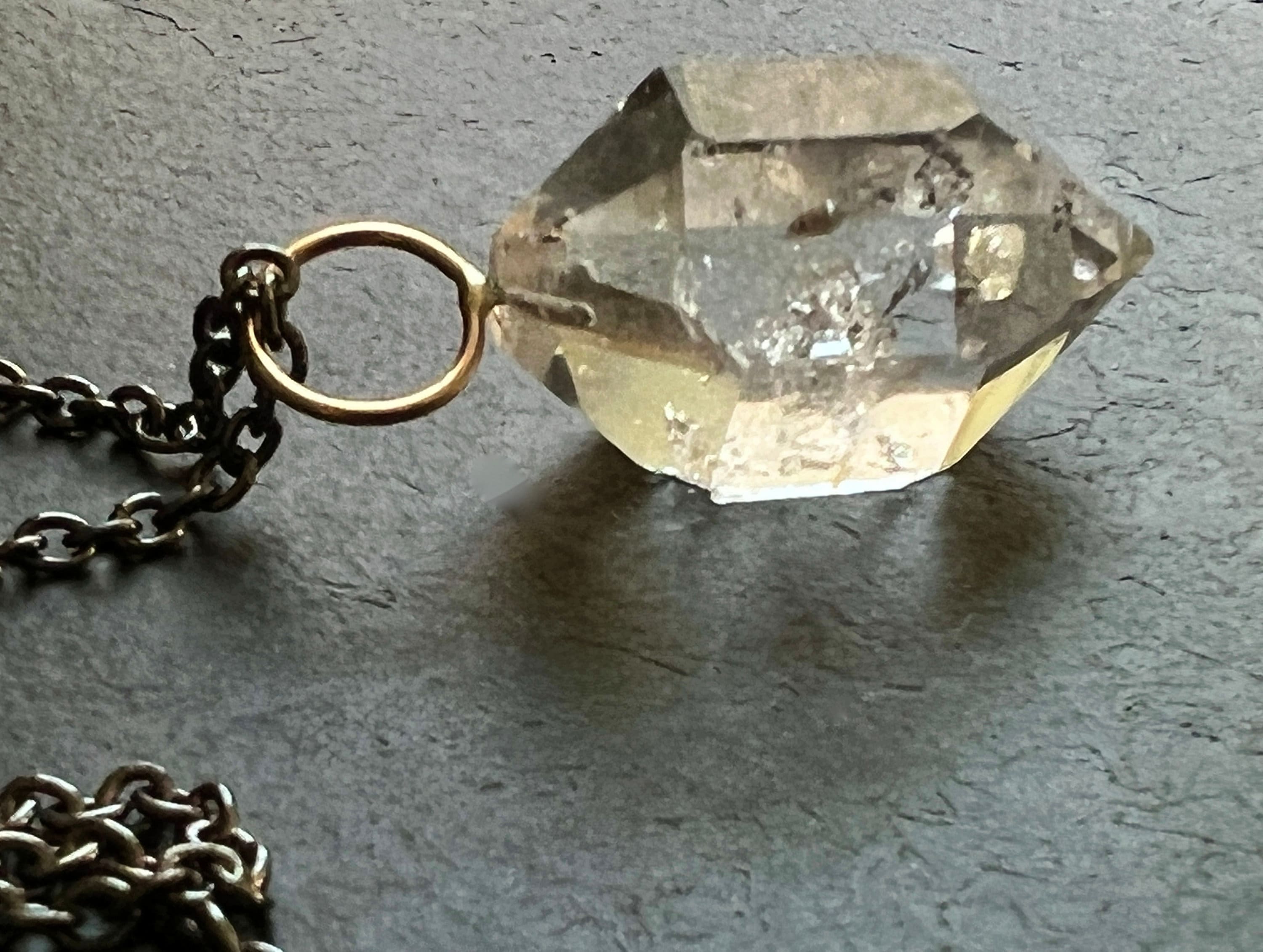 This dazzling single Herkimer Diamond pendant hangs at 32" in length on an oxidized sterling silver chain with hand crafted 18k gold J hook. The pendant has been drilled and holds a 14k gold jump ring allowing the piece to slide and move freely. The Herkimer diamond measures 20mm x 18mm and is of AA+ quality. The clarity of the gemstone is pleasing to the eye and to the touch.

Herkimer Quartz "Diamonds" are the high energy seekers of the crystal world. They manifest pure, solid light and perform as a powerful amplifyer of spritual energy. Herkimer diamonds are harder than other quartz, giving them added strength and durability to handle difficult challenges beyond the scope of other quartz crystals. What they lack in physical size, they compensate in spiritual energy. These stones are double pointed Quartz crystals, formulated organically through nature.

They imbue the characteristics of diamonds, by their clarity and brightness. These raw quartz crystals are mined exclusively in Herkimer County, NY. They are believed to be nearly 500 million years old, each stone has naturally formed with eighteen facets, six sides, and two points (double terminated). While they are not actually diamonds, they earned this nickname for their diamond-like shapes. The diverse crystals come with a number of mystical inclusions, which add to their value and character. Each stone is uniquely formed.

Herkimer Diamonds are ascension stones; they will take you to the highest spiritual vibration possible while still being in your physical body. This stone energizes, enlivens and promotes creativity. They enhance telepathy, and memory. Herkimer Diamond is a detoxificant.