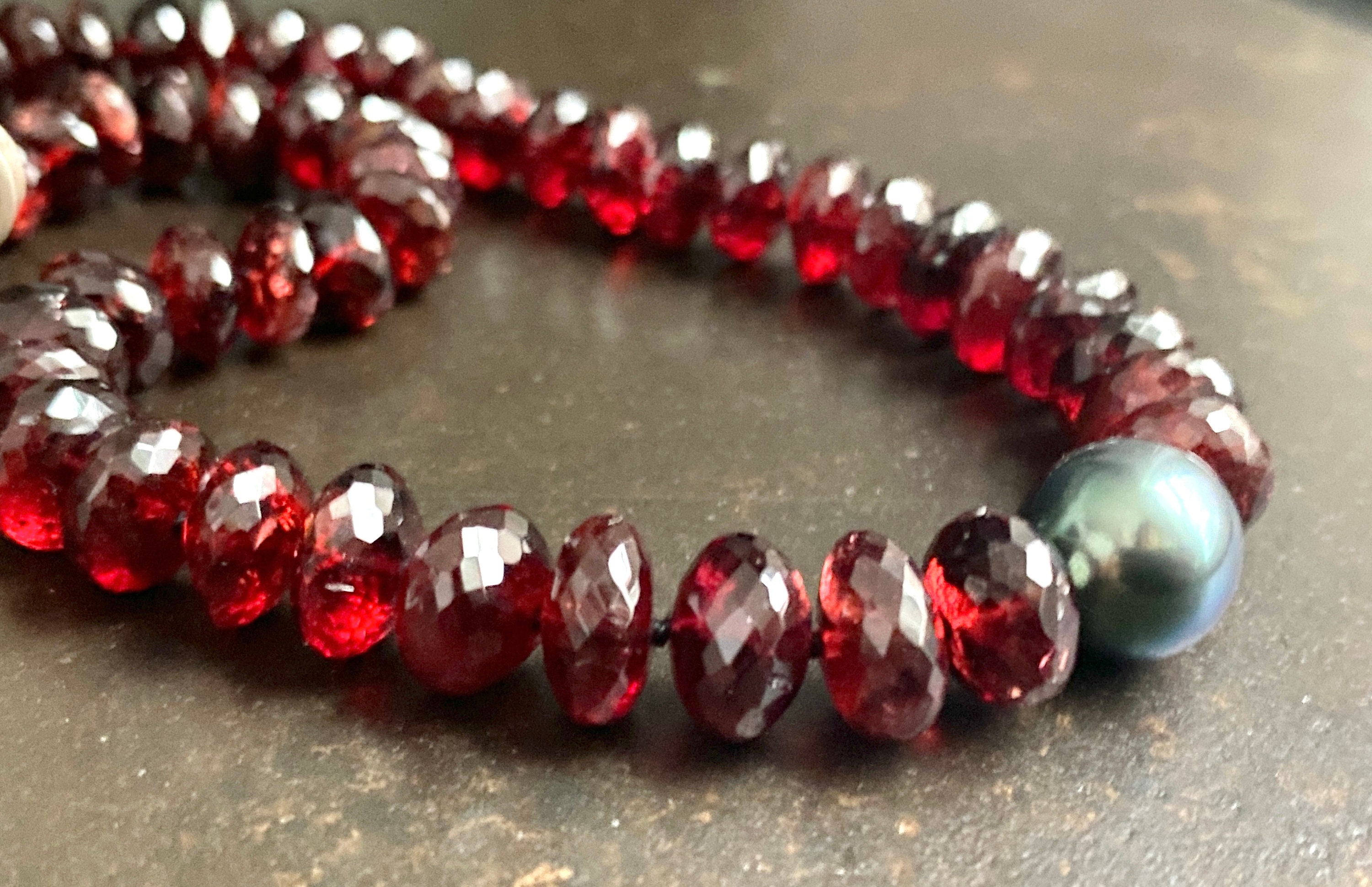 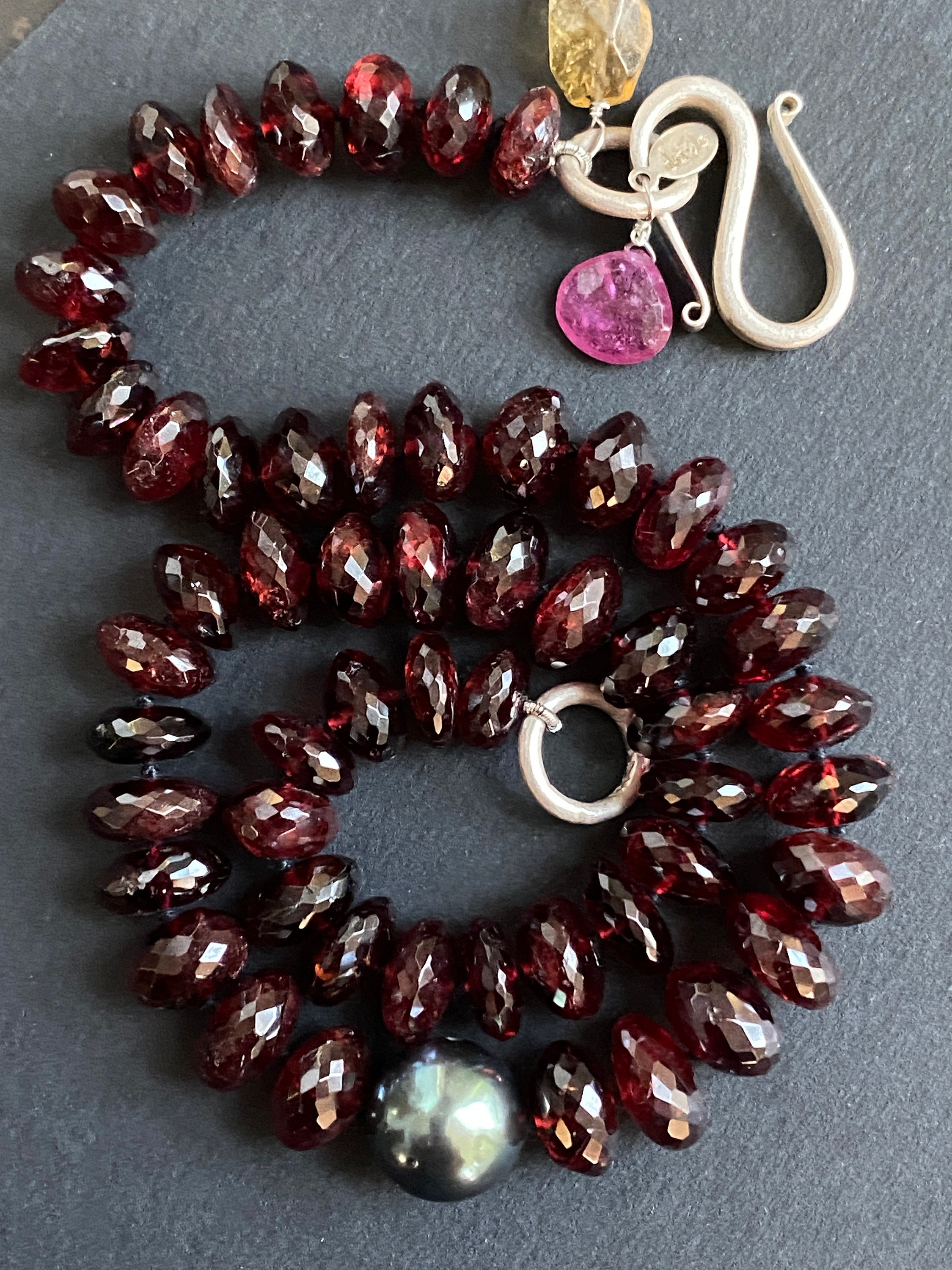 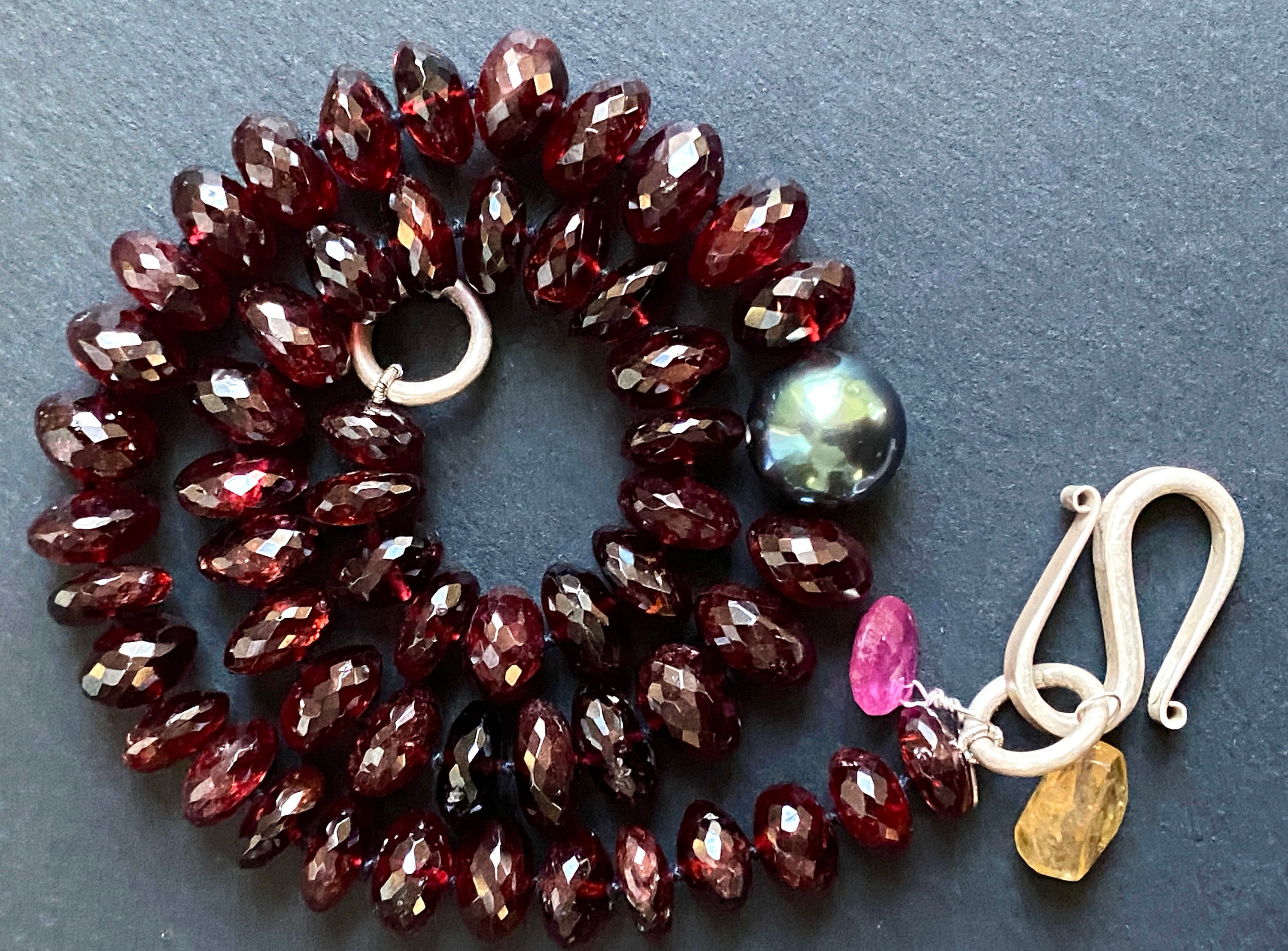 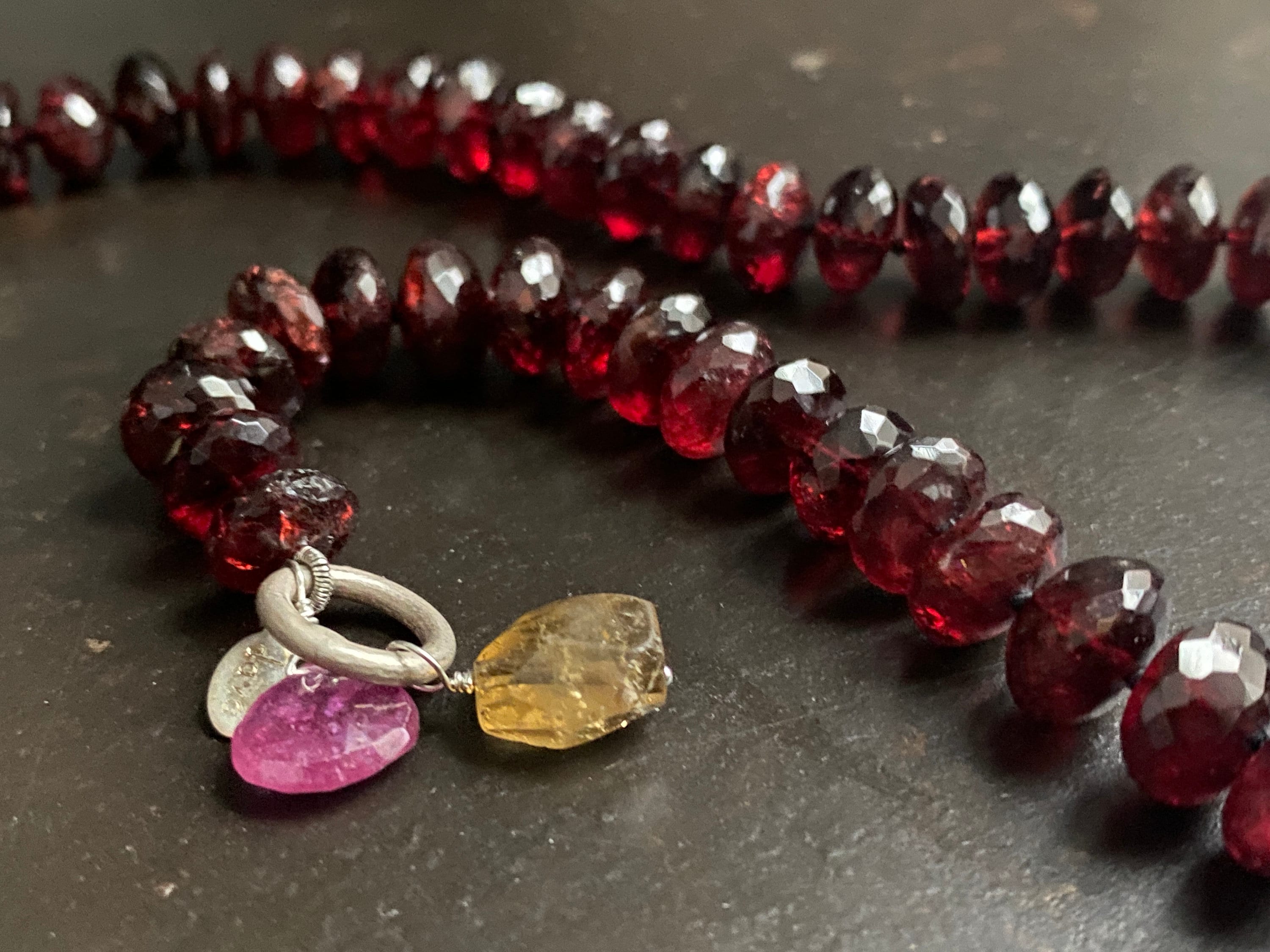 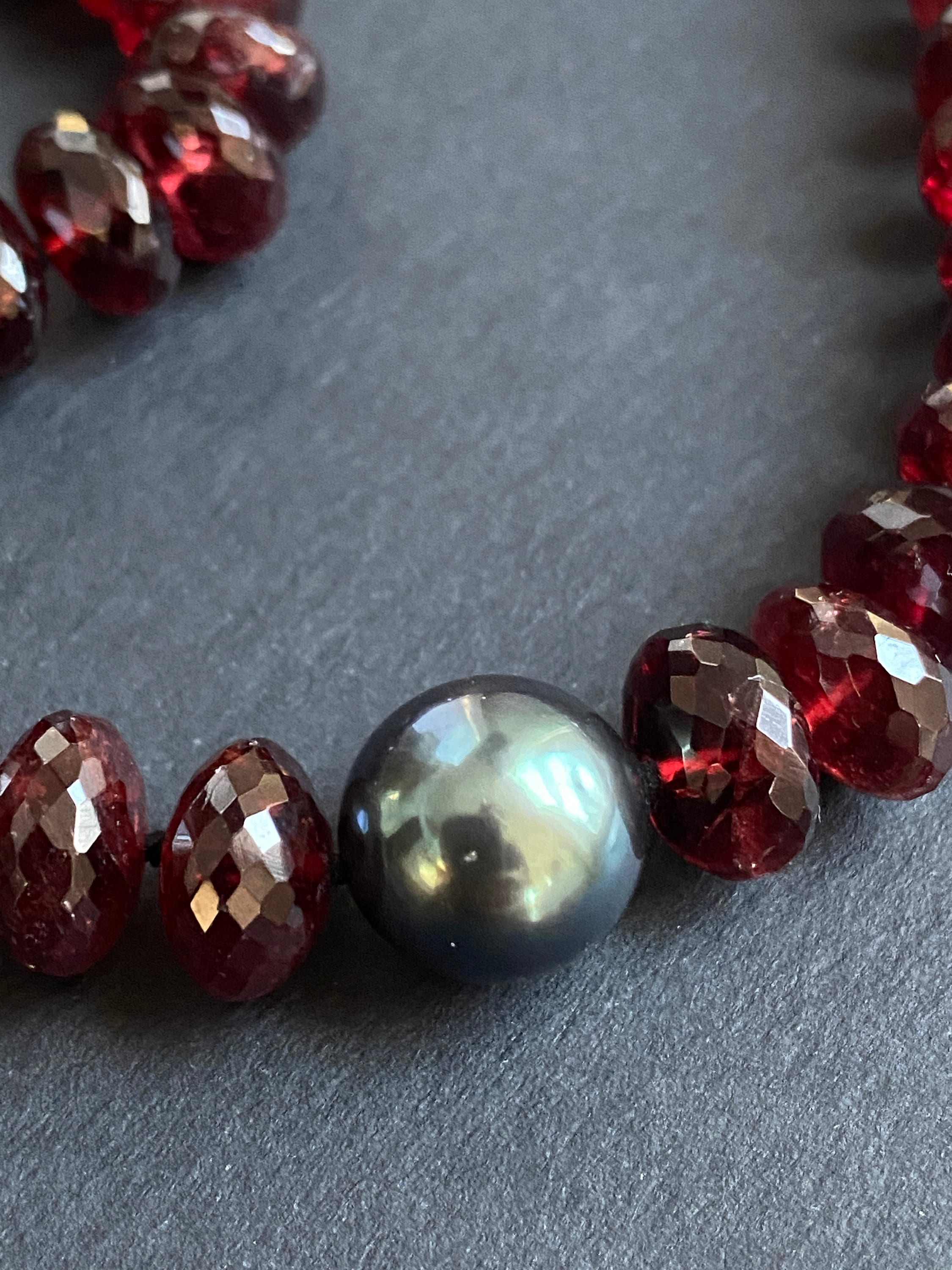 This bold garnet necklace combines the demure beauty of a 12mm Tahitian pearl, showing it's lustre against the deep rich hues the garnets portray. The faceted rondelles range from 6-10mm. The piece is hand knotted for grace, strength and fluidity. The matte sterling silver clasp is hand made, and holds a citrine and raw pink tourmaline gemstone for additional energy and color. Overall length is 16.5".

Derived from their Latin name granatum meaning "seed of the pomegranite", garnet obviously references the color of this fruit.
Garnet inspires love and devotion. It balances the sex drive and alleviates emotional disharmony. Deep red garnet stimulates the controlled rise of kundalini energy and aids in sexual potency. Garnet clears negative Chakra energy and is very useful to wear in times of crises. It activates and strengthens the survival instinct, bringing courage and hope to bleak situations.

Pearl Lore:
The ancient Greeks believed that pearls were raindrops that had fallen into an oyster. When Venus or Aphrodite, the goddess of love was born from the sea on an oystershell, drops of water that dripped of the goddess became pearls.
In the Tahitian legend, the Polynesian god of peace and fertility descended to earth on a rainbow and gave oysters to man as a gift. Once the oyster gave birth to a beautiful black pearl, the god offered it to their princess as a token of his love and affection.
Pearls are organic gemstones formed my shelled mollusks. Natural pearls such as this are very rare. Pearls were thought to be the perfectly and effective love potion. The power of the pearl; Romans wore pearls for the medicinal and protective qualities. Pearls represent purity, encouraging good health and wealth. They balance hormones, and are also considered to be a very nurturing gem.