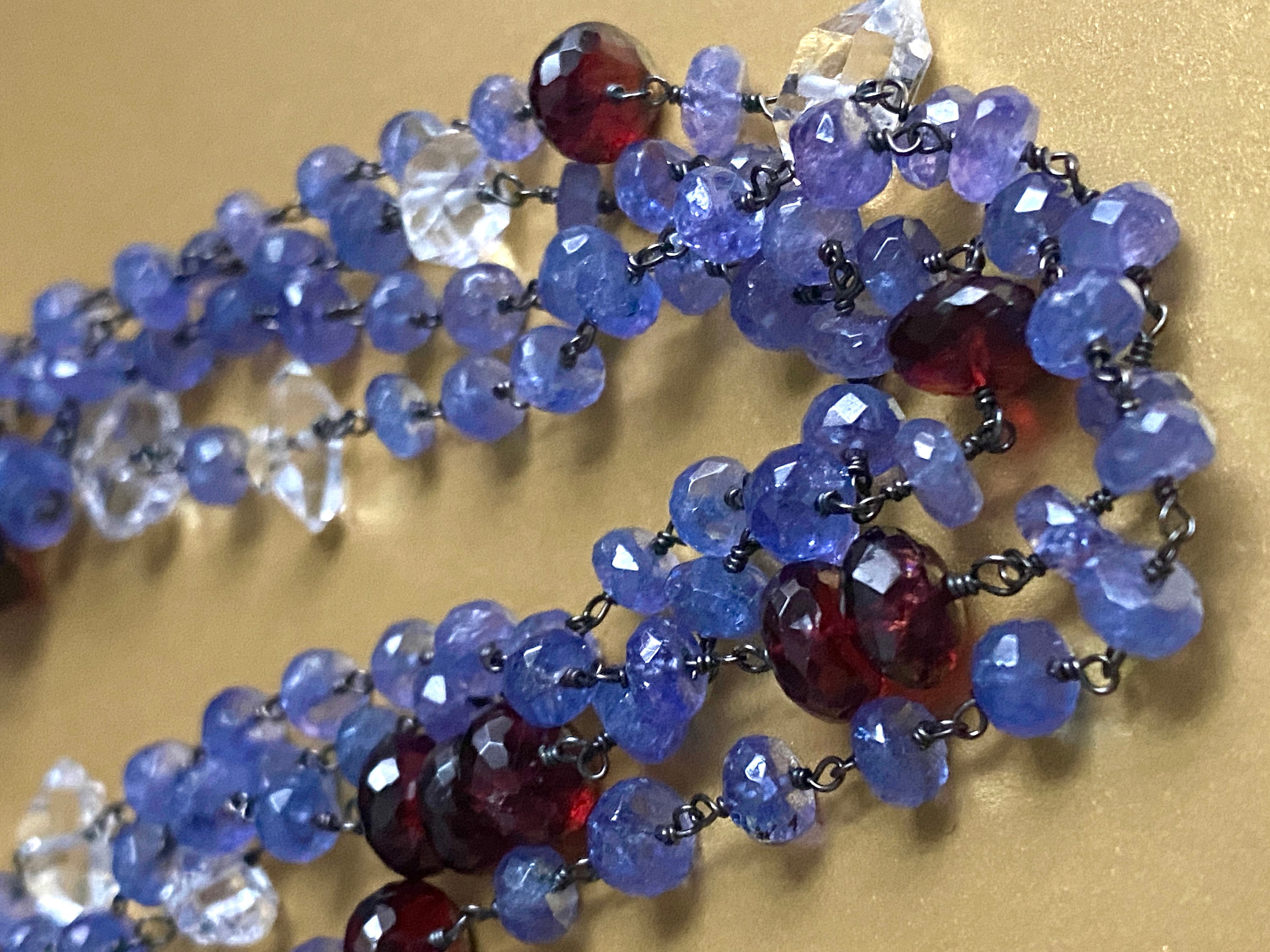 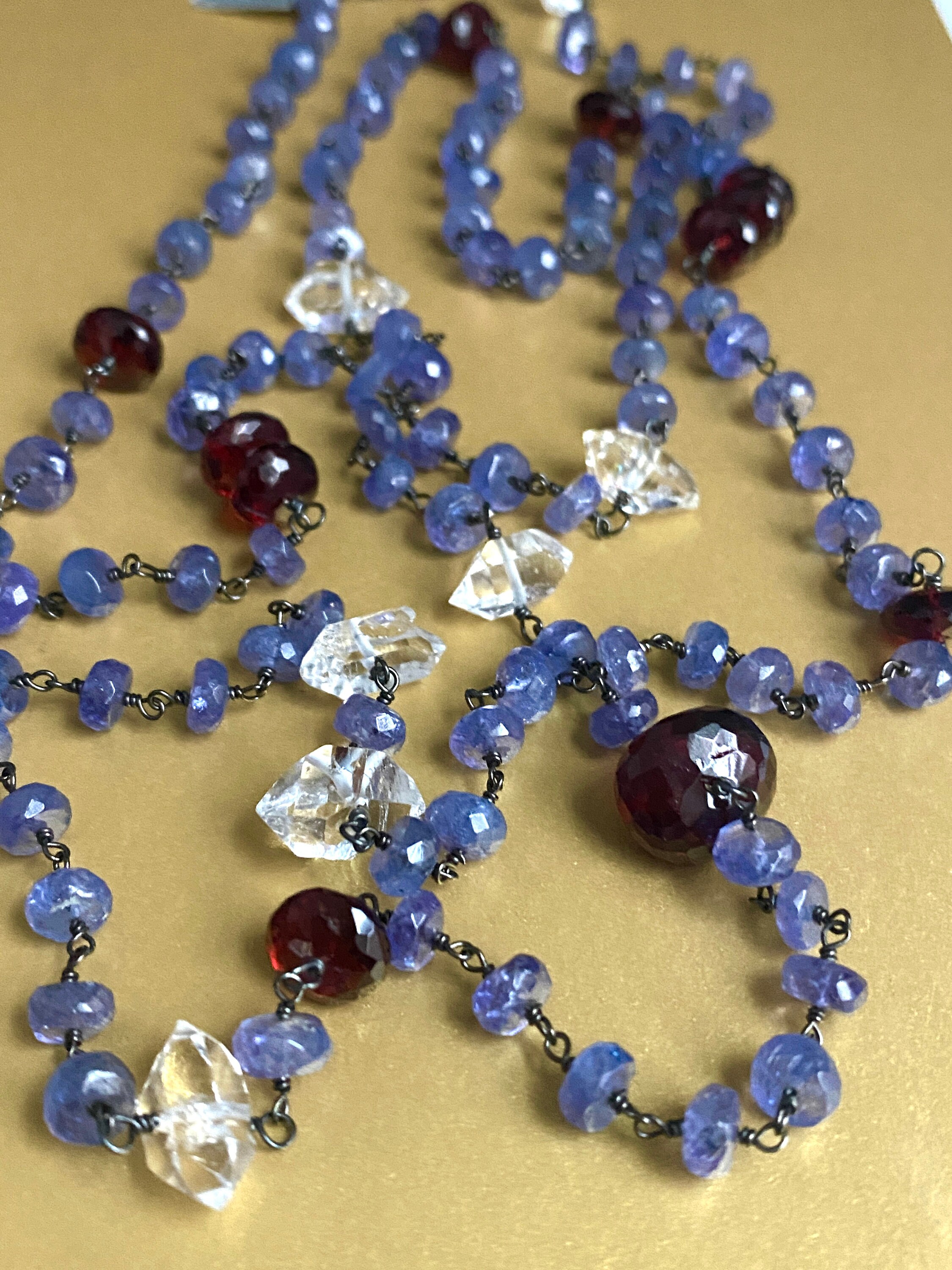 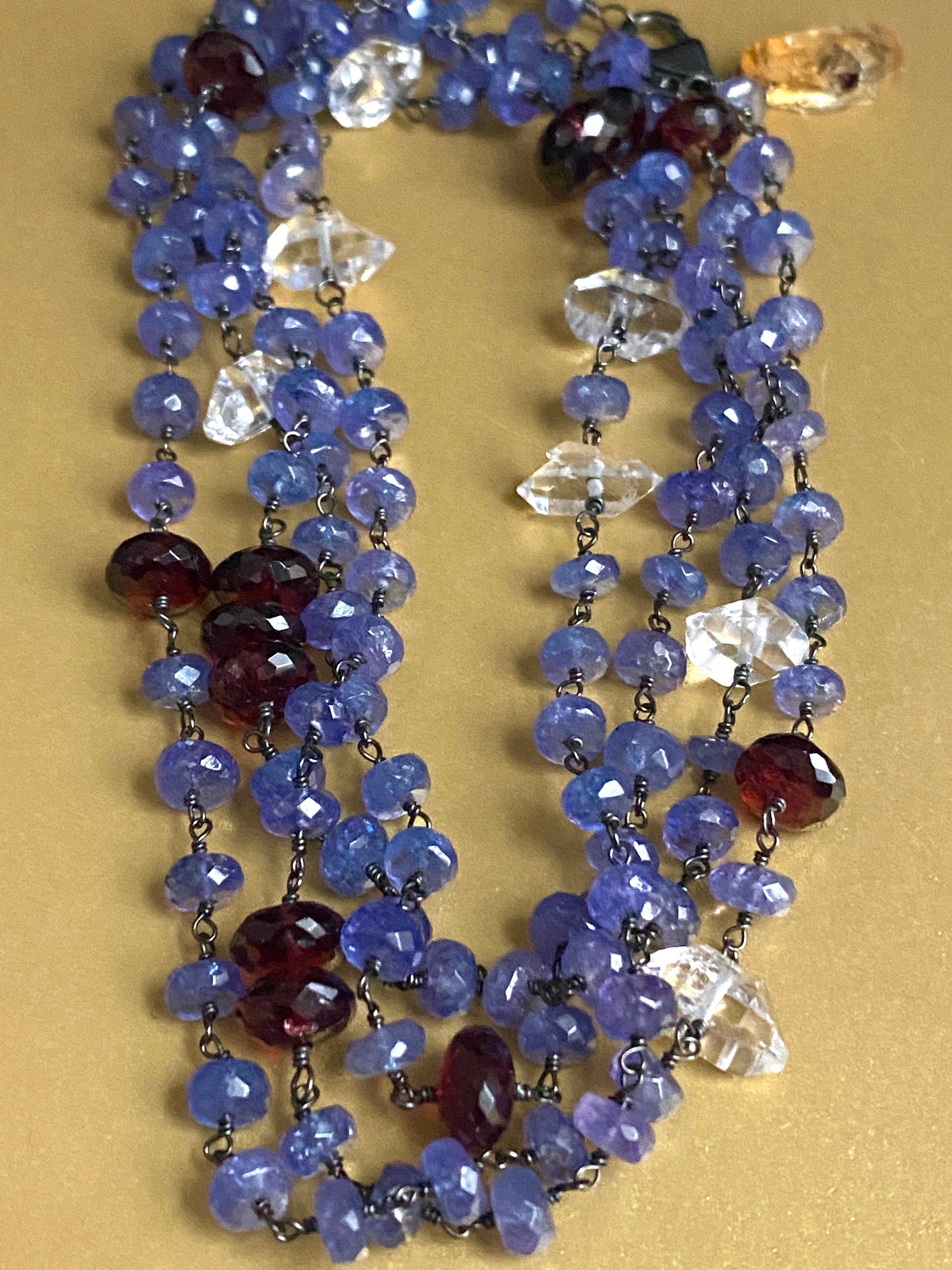 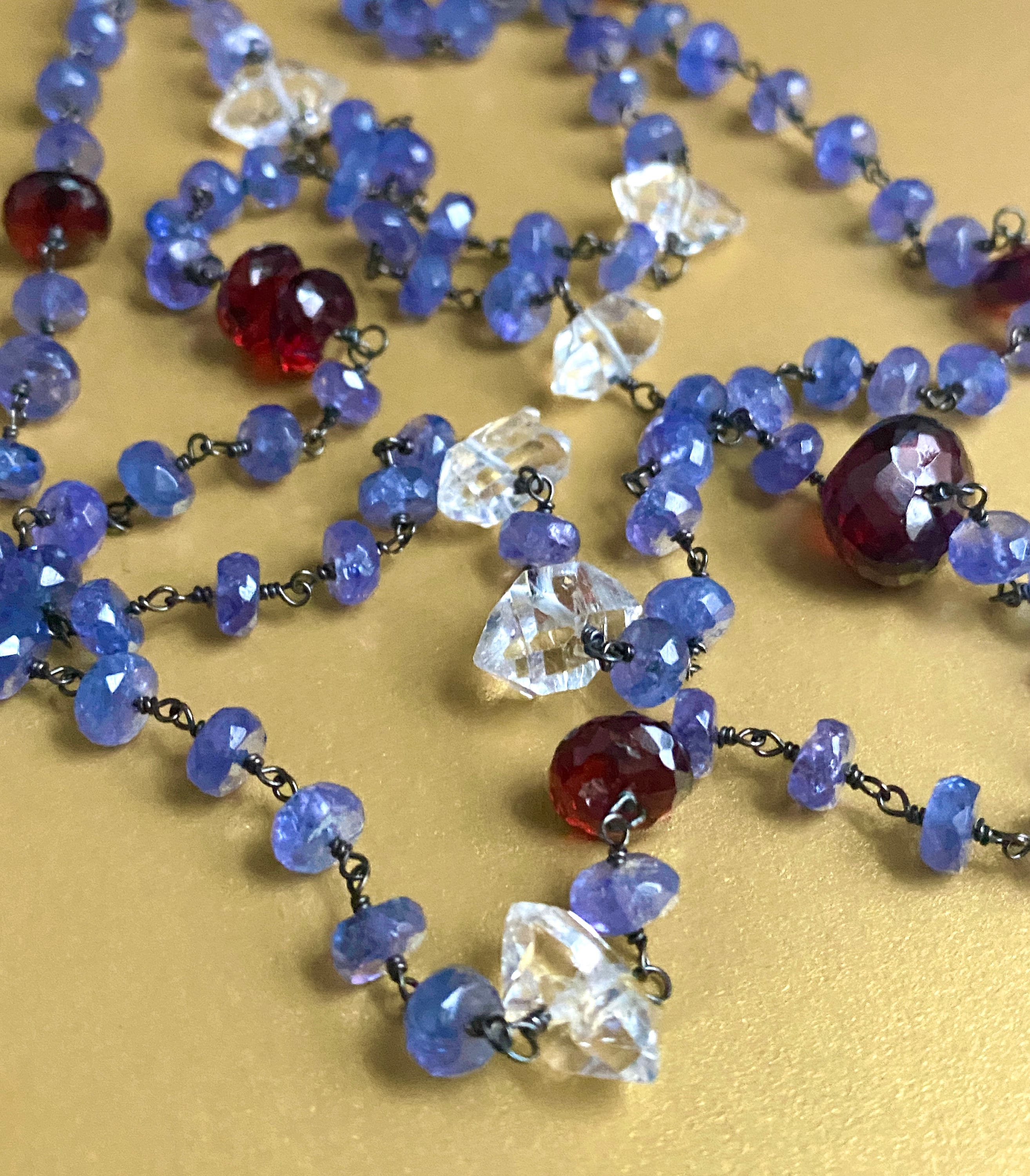 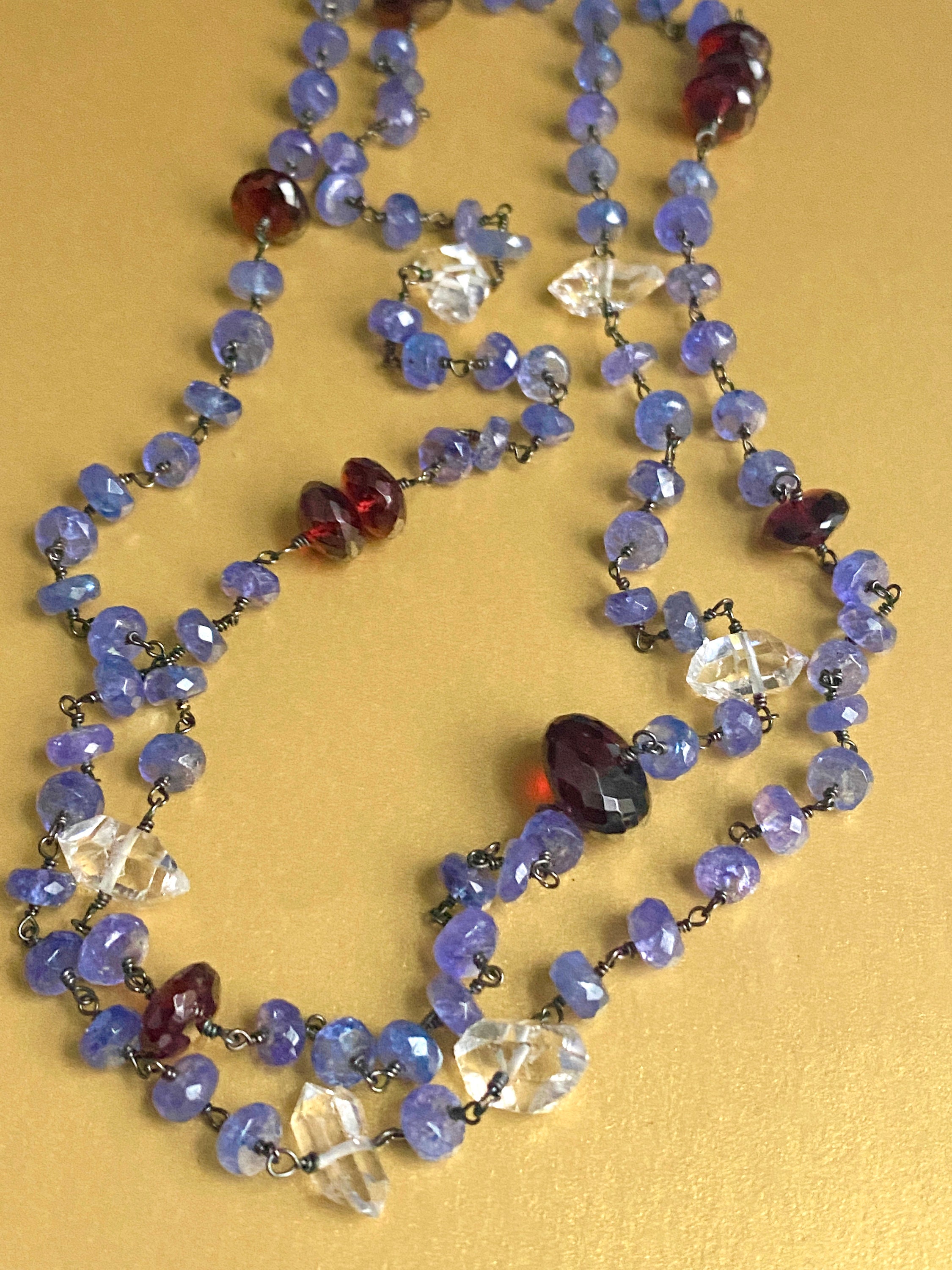 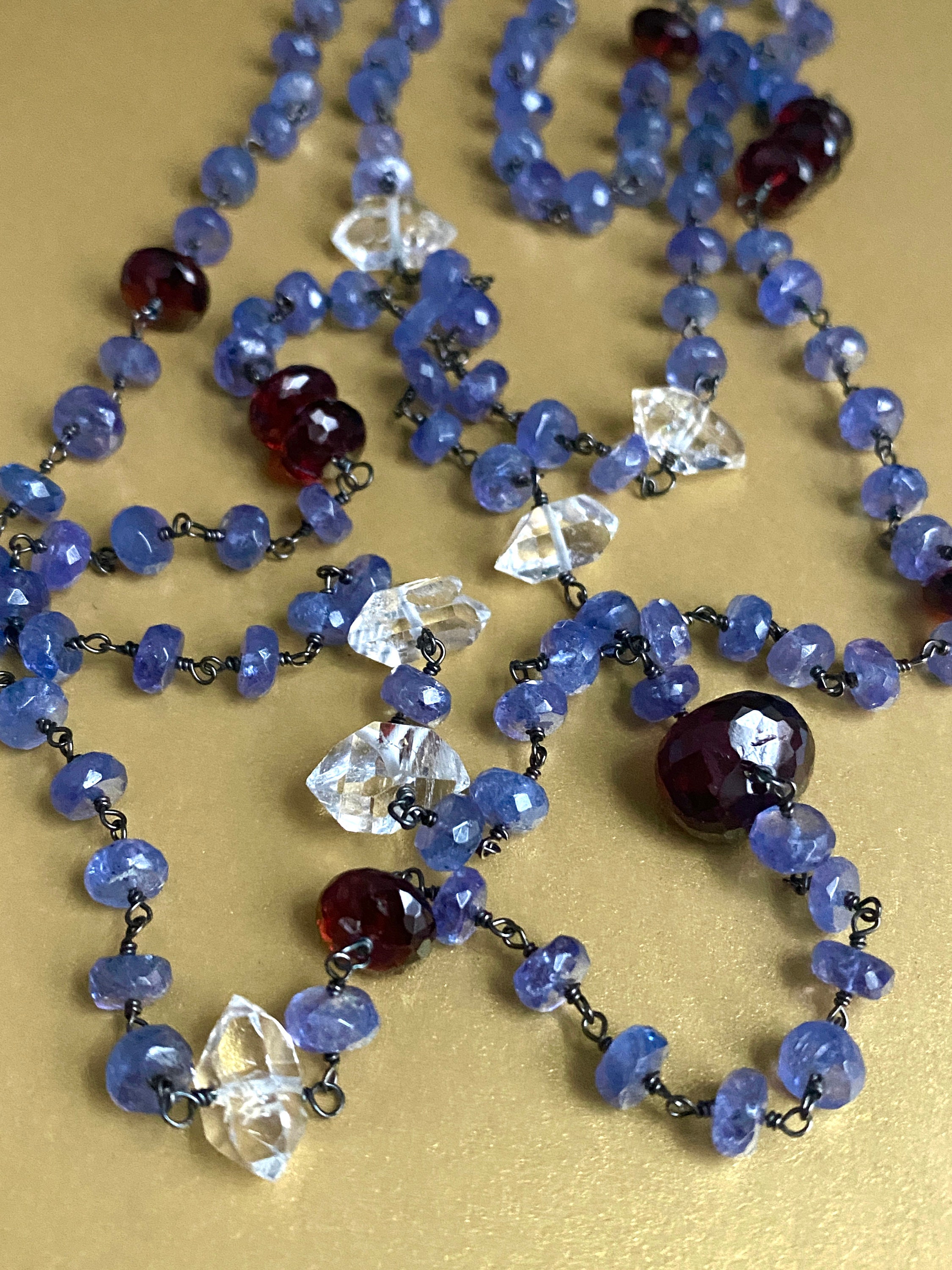 The combination of three very different colored gemstones mingle together to create this unique piece. Rather unexpectedly, you will find Tanzanite, Garnet, and Herkimer Diamonds. They live in harmony in this 44" rosary style necklace. The wirewrapping is hand done, using oxidized sterling silver. 7, 8-10mm herkimer diamonds are dispursed throughout the purple-blue tanzanite rondelles, along with larger deep red garnets. The entire piece is playful, and easy to wear. It can also be doubled for another look.

Tanzanite:
Tanzanite is a stone of transmutation, shifting from lilac-blue to saphhire blue. It is one of the most valuable of all metaphysical crystals for spiritual exploration bringing together all aspects of communication and psychic power. It is very helpful in merging the mind and heart energies. This stone is realitively rare and very costly. It was discovered in Africa,1967.
This stone is calming and soothing. It helps move along difficulty in communicating. It is very good for carreer change. Tanzanite is said to strengthen the immune system. The color of this stone reflects the sky. It marks the beginning of life and emotion. Blue stones bring trust, faith, patience and respect.

Garnet:
Derived from their Latin name granatum meaning "seed of the pomegranite", garnet obviously references the color of this fruit. This is January's birthstone.
Garnet inspires love and devotion. It balances the sex drive and alleviates emotional disharmony. Deep red garnet stimulates the controlled rise of kundalini energy and aids in sexual potency. Garnet clears negative Chakra energy and is very useful to wear in times of crises. It activates and strengthens the survival instinct, bringing courage and hope to bleak situations.

Herkimer Diamond:
Herkimer Quartz "Diamonds" are the high energy seekers of the crystal world. They manifest pure, solid light and perform as a powerful amplifier of spiritual energy. They are much harder than other quartz, giving them added strength and durability to handle difficult challenges beyond the scope of other quartz crystals. What they lack in physical size, they compensate in spiritual energy. Herkimer Diamond is double pointed Quartz crystal, formulated organically through nature.
They imbue the characteristics of diamonds, by their clarity and brightness. These raw quartz crystals are mined exclusively in Herkimer County, NY.


Herkimer Diamonds are ascension stones; taking you to the highest spiritual vibration possible while still being in your physical body. This stone energizes, enlivens and promotes creativity. They enhance telepathy,memory and are known to detoxify.

Believed to be nearly 500 million years old, each stone having naturally formed with eighteen facets, six sides, and two points (double terminated). While they are not actually diamonds, they earned this nickname for their diamond-like shapes. The diverse crystals come with a number of mystical inclusions, which add to their value and character. Each stone is uniquely formed.